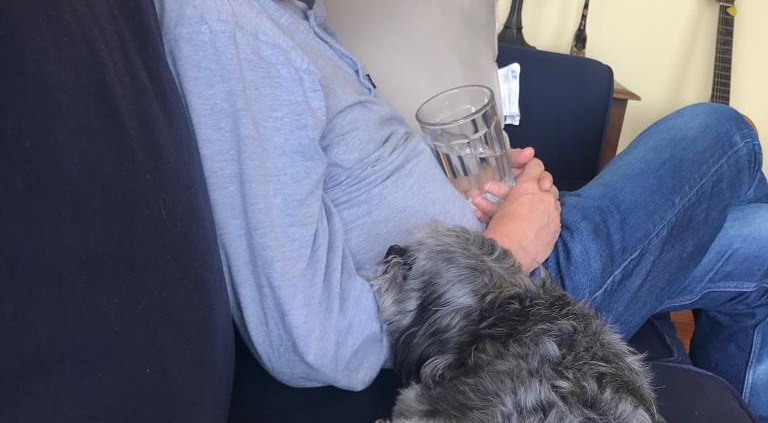 Faby and I had agreed that she would arrive at 8:45 but  I am supposed to be at work at 8:00 and I don’t want him to be by himself, so I changed my hours to 9 am and the problem is that she arrives at 9 am sometimes, thank you LA traffic.  So while Rick is eating, I finish getting ready. When Faby arrives she helps me with the dishes and If I am running late she makes his breakfast. So I am late, I am always late, either waiting for Faby, or because I have things to share with Faby before I leave or Rick is having a bad morning, I don’t know but stuff always happens and there’s always so much going on.

It doesn’t matter what time it is, Rick follows me; I speak a with Faby and make my breakfast as fast as I can. Normally I drink a shake because it’s faster, or eat at work. I ask to Rick put on his shoes, some days he refuses to put them on or puts the right shoe on the left foot. I am about to walk out the door and I say “ok I am going to work and you will stay home ok?” Sometimes he answers “ok” and says “I know.” But sometimes he follows me out the door. I tell him that he needs to stay home and he looks at me with a sad face that is worse than a kid looking at his parent on the first day of school. I say, I’ll be home at lunch, that’s just a couple of hours.  I feel so guilty whenever I leave. Sometimes I almost cry while walking to my car. The next thing I know, Faby sends  pictures of him dancing in the middle of the kitchen or laughing and I think maybe in the moment everything is exaggerated for him but he forgets fast. My heart hurts less, but still hurts.

Lucky for me I work close to home and I go home for lunch every day. I come home and Faby has been cooking lately so we all eat lunch and chat and I tell them about the first half of my workday. After lunch I give Rick his pills and olive oil and then I ask him to go to the bathroom? The answer is always “no.” I say let’s try. We have to do this bathroom stuff while I’m home for lunch. I ask Faby how the day was and we agree what they will do that afternoon. I always prefer that they go outside so he can walk and see the sun and get fresh air and exercise. For some reason he is always cold. I know maybe you thinks that we live in Minnesota, where he was born, but we live in Los Angeles, California. Beautiful days, blue skies and hot. But Rick feels cold, always cold. Or in the summer hot always hot. I have learned that people with AD are too cold, too hot, everything hurts. We layer his clothes so that he can peel them off, like an onion. On Demophonic.com, Rick’s music publishing website, he wrote a song called Land of Lakes for Minnesota where he’s from. In the song he sings, “Land of Lakes, city of water, winter’s colder but summer is always hotter!”

My typical day part 2: I am late